The Parsis of Bombay 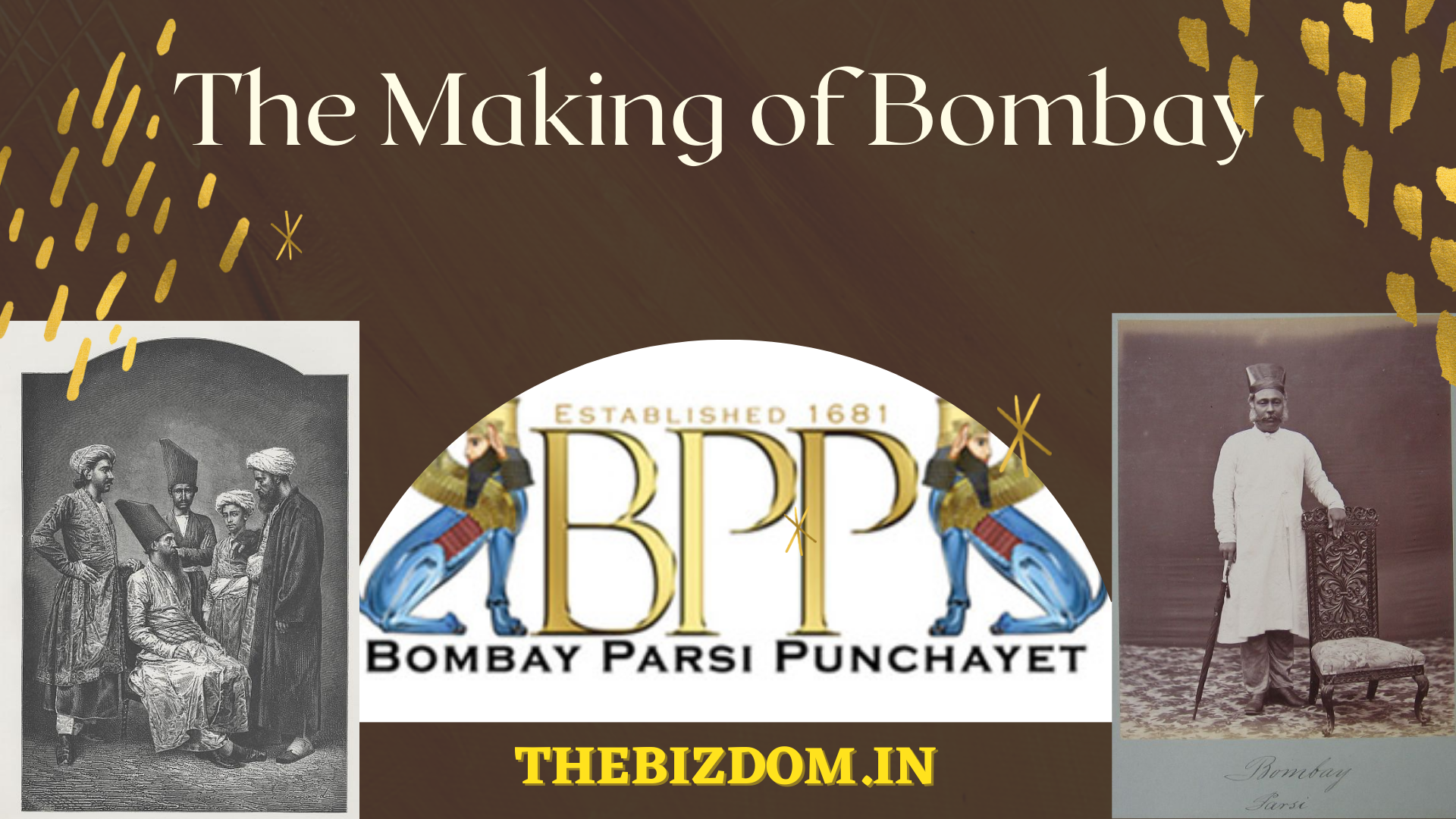 No one was interested in present-day Mumbai. Trade of Indian Ocean was controlled from Malabar, Goa & Gujarat (Surat, Madavi). Portugal grab it in 1534, and rewarded most of the land to religious orders (Franciscans and Jesuits), and named this place as Bom Baim (Good Harbor).

Back in Europe, they needed a strong ally, so their princess was married to English’s prince & Bombay ended up with Royal Crown and hence they offered this to East India Co, who rejected saying the cost is too high. Royal Crown tried on their own and failed royally, and hence again offered EIC at a huge discount.

EIC took it, but they needed human capital. A militia of Bhandaris, that was until then had made their living brewing liquor, was raised to ensure security. Muslim weavers were approached, Hindu bankers and traders and Parsis traders & Shipbuilders. The Parsis had migrated to Gujarat in the 7th century. With the rise of the British in Western India, the Parsis’ association with them began to grow. The Parsis became the first Indian community to establish a close rapport with them.

Soon the Shipyard built by Mr. Wadia was the linchpin for EIC’s Opium Trade. Ships built at the Wadia Shipyard revolutionised the modern world, as they witnessed two major events in modern history.

The Treaty of Nanking, ceding Hong Kong to the British was signed on HMS Cornwallis, in 1842. The national anthem of the USA “Star Spangled Banner”, was composed by Francis Scott Key onboard another Indian built ship (HMS Minden) when the Ship was on a visit to Baltimore. Both of these were built by Jamshedji Bomanji Wadia.

While EIC was also doing the trade from Calcutta (mostly British agencies). But Parsis traders as middlelayer was a better way to push this.

Parsi merchants like Jeejeebhoys, Jivanjis, Banajis (Ghoga Street: Ghoga was the nickname of Cowasji Banaji, as in a loud voice he used to say “Go, Go.” for his ships), and Wadias ran ships to China, established their own companies & entered partnerships with British trading houses.

“Factory” system, with its continuing dependence on local traders and capital, persisted for roughly 2 centuries. Traders such as the Banajis, the Amichunds, Tatas and the Jejeebhoys were able to build mansions within the walls of the Fort—Bombay’s original gated community.

The Parsis became the agents and brokers of the British, learnt the British business methods like joint stock companies. They undertook trade with China and other countries, and became merchant princes and potential investors. Jivanji among the first Parsis to go China and establish business contacts (1700s). Trade proved profitable and made them adopt a new family surname (Readymoney: as they were always ready with money!).

When the Great Indian Peninsula Railway Company was launched, Framji Cowasji Banaji was the first and the only Indian to purchase its shares.

From the 1850s, composition of export changed from Indigo and opium to cotton, jute and tea. Lincoln’s abolition of slavery in America led to the American Civil War in the 1860s and abruptly cut off the supply of cotton from the Southern United States to the mills of Lancashire. The opening of the Suez Canal in 1869 had increased Cotton trade considerably from Bombay.

In 1851, Cowasjee Nanabhoy Davar mooted the idea of establishing a textile mill, and floated Bombay Spinning and Weaving Mills as a joint stock company in 1854. It started production on February 7, 1856 and was the first operational steam-powered cotton mill in Asia to do so. Bombay as the India’s cotton manufacturing hub was ready to takeoff.

Nusserwanjee Maneckjee Petit floated Oriental Spinning and Weaving Company in 1855, Dinshaw Petit was another early mill owner (grandfather of Rattanbai who was the wife of Jinnah). In 1857 Davar again floated the Bombay Throstle Mill Company which produced yarn in 1859.

They also invested in other British bank shares and sometimes became directors of the early British companies. In 1835. the first savings bank was opened in Bombay and Jamsetjee Jejeebhoy was one of its directors. The Commerical Bank of India was founded in 1845 and the Mercantile Bank of India, London and China in 1853. Cowasjee N. Davar was a promoter of both the banks. In 1844 the Parsi merchants of Mumbai set up the Parsi Insurance Society, to insure their ships.

The Central Bank was established in 1911 by a Parsi house, and merged with the Tata banking business in the 1920s. Becoming partner is Railways also. In 1919, the New India Assurance Company was started by Tata’s in the wake of the growing Swadeshi Movement.

Dadabhai Naoroji and Mancherjee Bhownaggree (both Parsi) were the first 2 Indian to be in House of Common, later Dadabhai will earned a lasting place in modern Indian history. Bhikaji Cama will unfurled 1st Indian flag in Germany.

Pherozeshah Mehta was 1st Parsi to have Master’s from Bombay University. There are roads, halls and law colleges named after him. Parsi were doing good in education, was , whereas the when general literacy rate was only 8.3 (2.3 for women) in 1931, their rate 79 (73 among women).

In 1797 a Parsi started Gujarati types & used them for advertisements. In 1812 Fardoonji Marzban started ‘Samachar’. Bombay Chronicle started was by Pherozeshah Mehta, as an anti-establishment paper in 1915. B.G. Horniman, (their British editor) will call Times of India as, ‘The Old Lady of Bori Bunder’.

By the late-18th century Parsi were among the most prominent investors in Bombay’s shipping industry, and in its spice, cotton and opium trade. As they prospered, many adopted European education, dress, and manners. Now, they focused on the other two Cs, Cricket and Cinema.

The first Parsi club, the Oriental Cricket Club, was launched in Bombay in 1848. They developed the Maidan Cricket, an Urdu word, from the Persian for ‘town square’. In 1886 a team of Parsi cricketers went on the first self-funded tour of England by non-Europeans.

Nowroji Saklatwala (from the House of Tata) was the first Chairman of the Cricket Club of India after its inception in 1933 till his death and was instrumental in the development of Brabourne Stadium, for which he also donated a large sum of money.

When Wajid Ali Shah was still ruling Awadh, Parsis had established many modern theatres which were the foundation of early Bollywood (actors). In 1918 J. F. Madan, the Parsi pioneer of cinema in Calcutta, claimed to control over one-third of the 300 cinemas in India.

Prompted by the demand of the Indian Defence Forces a Wadia Woollen Mills was started. Later is was renamed as Raymond’s (when Sassoon bought it) in 1925. Another Parsi started with butter supplies to Army, and few decade later AMUL got started against their practices.

Soda had become a popular beverage in London by the early 1800s. Parsis sensed the opportunity in this new Vilayati Pani and played a commanding role in this trade, as is evidenced by the surnames they adopted: Sodawaterwala, Sodawaterbottlewala, & even Sodawaterbottleopenerwala.

Dinshawji Pandole founded Duke’s, which he named after the brand of cricket ball he used while touring England with a Parsi cricket team. The Parsi also dominated the liquor biz. They later fought against the Prohibition rule of 1950. Parsi household, eat rice in the afternoon and wheat at night. The left over chappatis were kept wrapped in a muslin cloth & these Loaves of bread became double-roti/‘paoon-roti’, or ‘paoon’. Rashid Kohinoor started Britannia & Co. in 1923 & many more Irani Cafe followed.

A booklet can be written on their surnames. Before they adopted other funny names, most of them were Modis (literally, grocers) (originally priests). Feroze, the husband of Indira Gandhi, was actually is Ghandy. Another famous person with same surname was Jehangir Ghandy first to be awarded a Padma Bhushan in Trade (for his role in Tata Steel). And, it’s Tata Steel IPO that was an epic event in the History of Financial success for Bombay.

Other famous: S R Batliboi had a long association with Arthur Young. And, for years Batliboi will looked after the clients of E&Y in India. Sam Manekshaw was at one time on the maximum Company’s boards.

They also had a very strong presence in legal circle… from Seervai to Kanga , Daphtry to Nariman, Sorabjee et al. Each considered a luminaire.

One key reason for their success was due to their role as the interlopers. Post 1947, many talked about their love for the British and a popular joke was that the Parsi still referred Royal Queen as “our Queen” and “your President/PM”.

Newton and the bubble